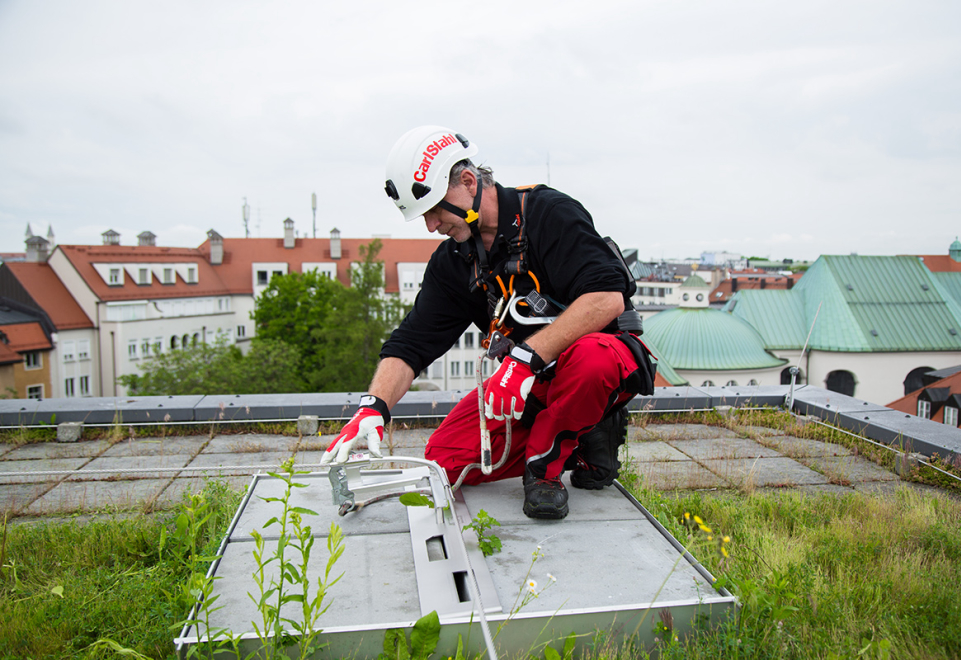 Safety at work - New catalogue on occupational safety and health Fall protection 2019
When it comes to safety in the workplace, it should not be missing: The Carl Stahl catalogue "Industrial safety - fall protection". The new issue for 2019 with 260 informative pages with products and services has just been published.
Read more 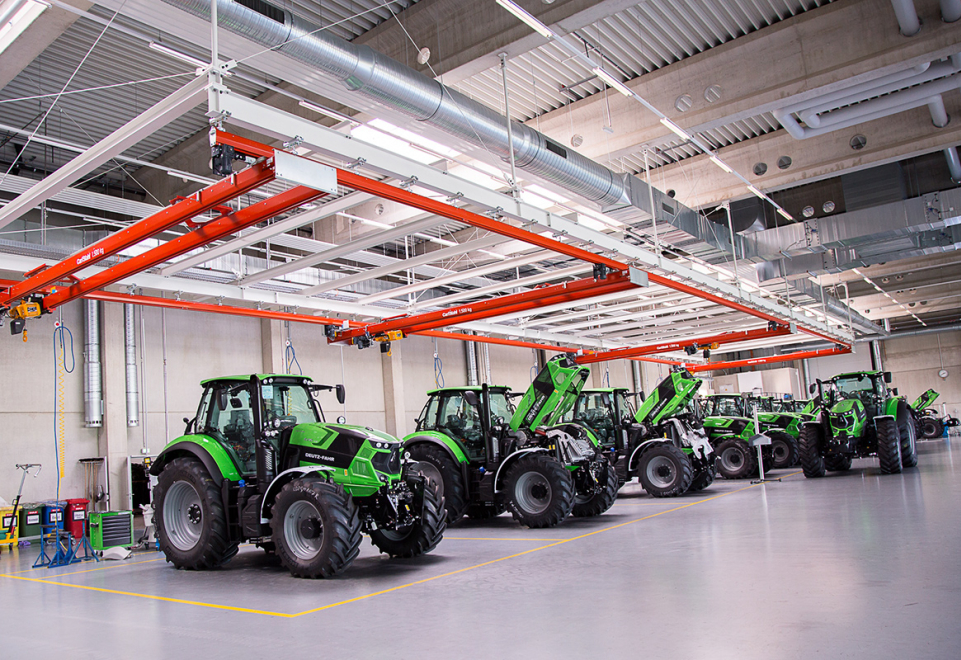 New tractor plant in Lauingen
90 million euros for the future - Made in Germany. The DEUTZ-FAHR brand has stood for reliable, innovative German tractor technology for over 100 years. This has made the brand successful worldwide. In order to further expand this brand core, the SDF Group went on the offensive.
Read more 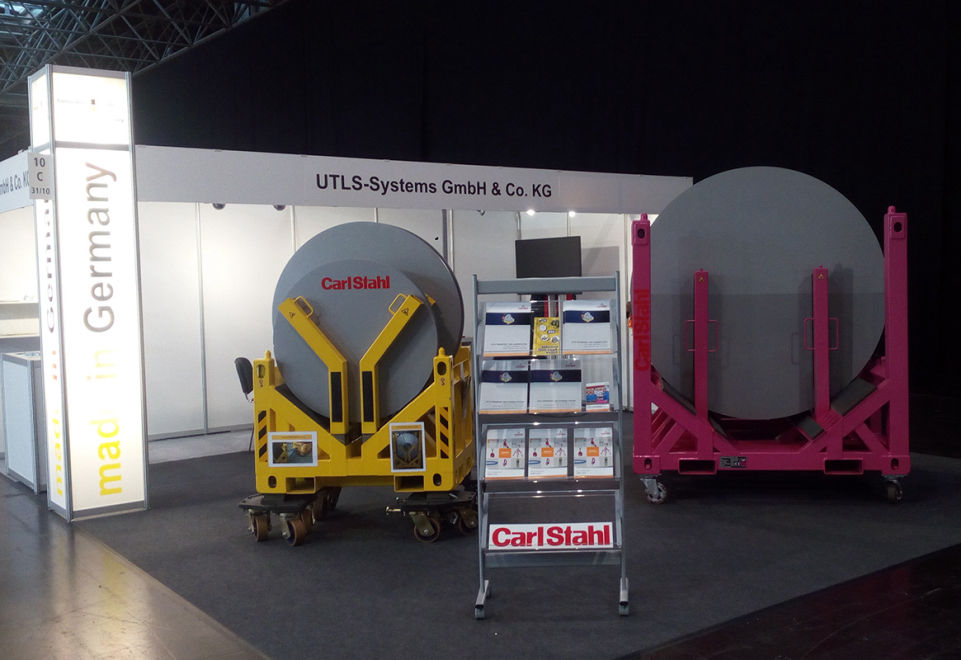 UTLS SYSTEM GmbH & Co KG at the Aluminium and EuroBlech trade fair
They are regarded as the leading trade fairs for the production and processing of sheet metal, aluminium and steel in Germany and Europe: Aluminium in Düsseldorf and EuroBlech in Hanover. Both fairs were last held in October. And this in each case with great encouragement.
Read more 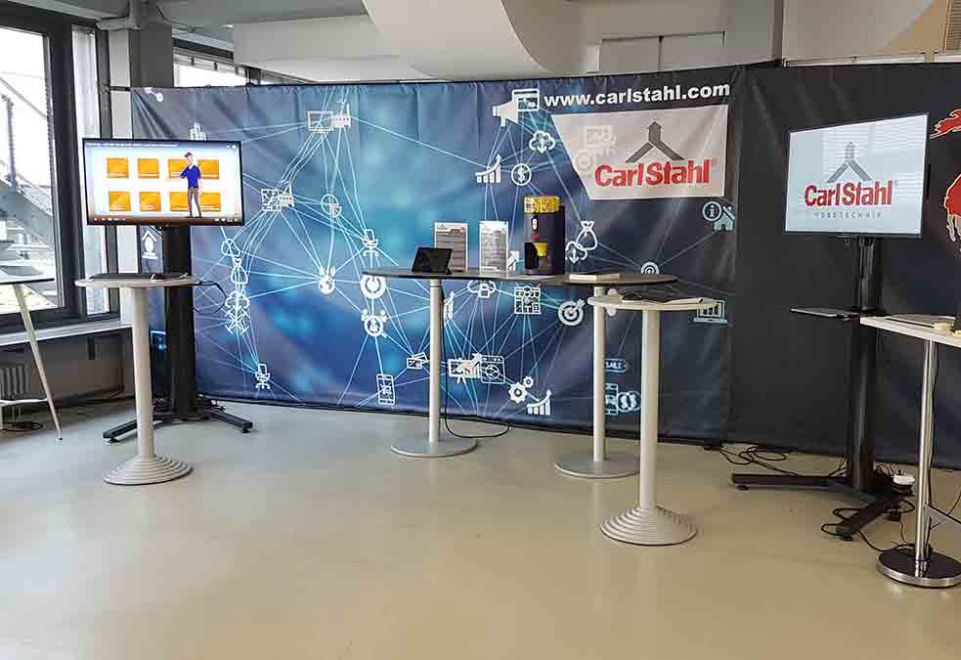 Space for visual thoughts and creative work
Digitisation, disruption and a world that is becoming increasingly insecure, unpredictable and ambiguous (VUKA for short): many companies are currently dealing with these current issues.
Read more 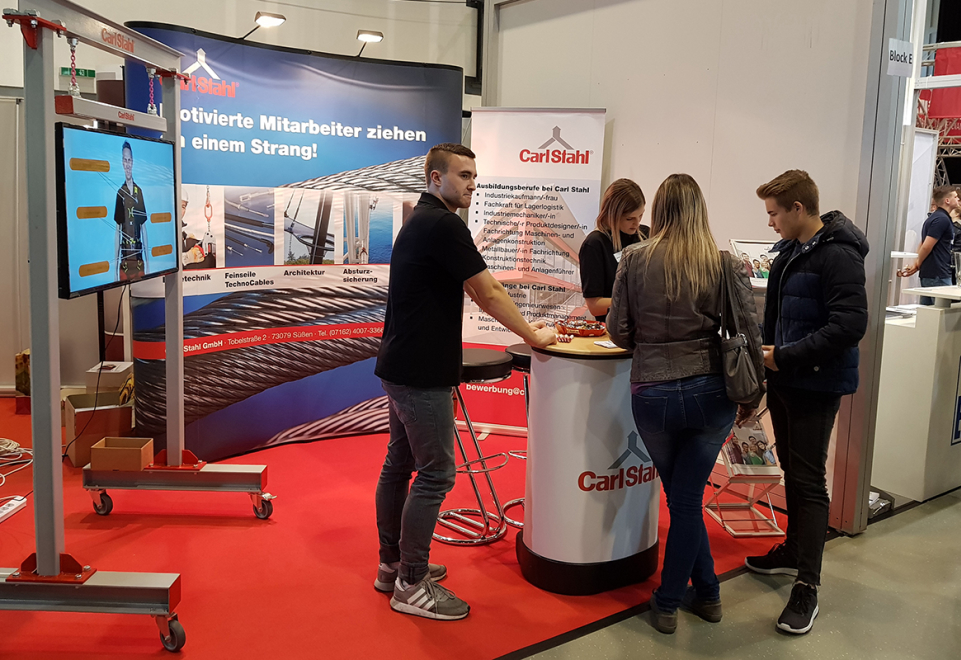 Information for starting your professional life
Already for the eleventh time the annual education fair took place in the district Göppingen on Saturday, the 10th November from 9-16 o'clock. 145 companies, schools and institutions presented their range of training places and study courses in the shipyard hall in Stauferpark in Göppingen. For Carl Stahl this central trade fair is an important platform to present itself as an attractive employer in the region in order to counteract the shortage of skilled workers.
Read more 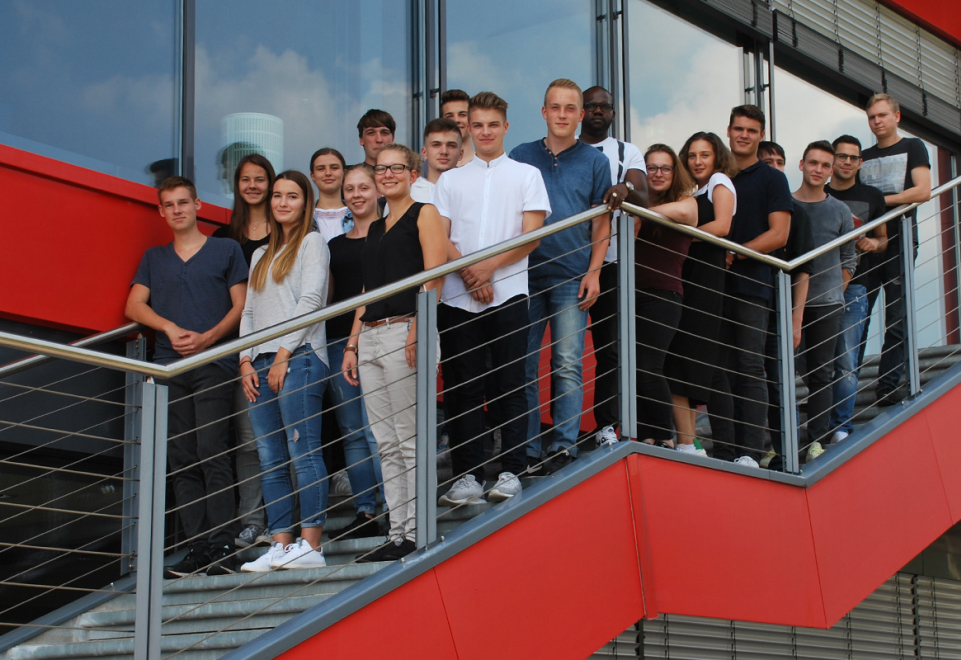 Introductory week for the new junior staff
It has been an integral part of the new apprentices at Carl Stahl for years: the introductory week at the official start of training. It is only one of many measures that have since been established with lasting success.
Read more 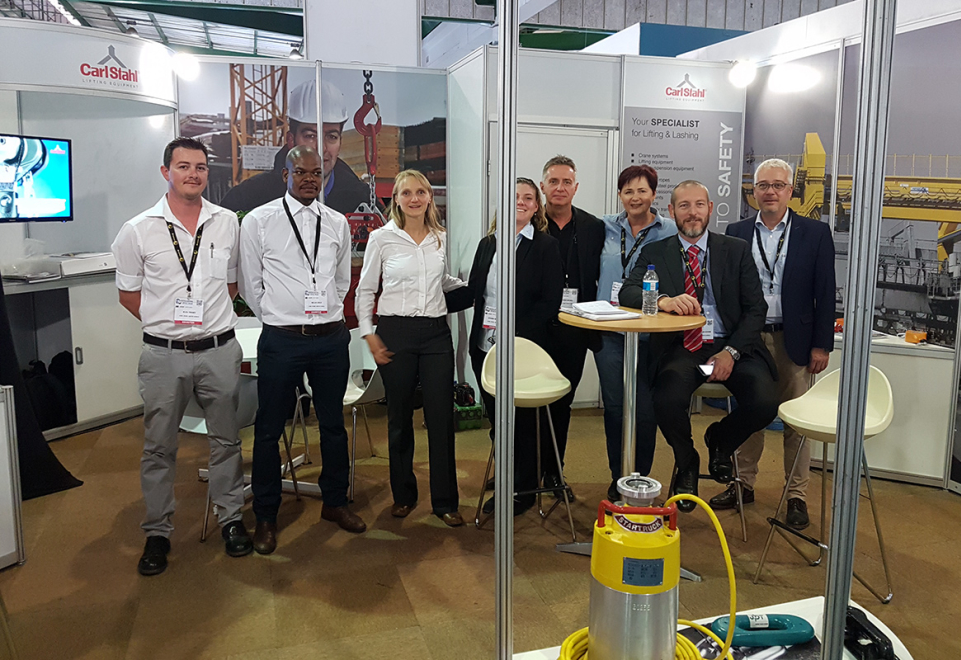 Carl Stahl at the Electra Mining Southafrica 2018
Potential gateway to the mining sector Since its foundation in 1972 the Electra Mining Fair takes place every two years. Last held from 10 - 14 September on the grounds of the Johannesburg Expo Centre. As an international exhibition for mining, industry, machine tools and electrical engineering, it is one of the leading trade fairs on the African continent. More than 600 exhibitors attracted well over 29,000 visitors from 59 countries to the South African metropolis. The Republic of South Africa is very rich in natural resources. Their promotion accounts for about 40 to 50% of export revenues. The country has the world's highest production volumes of chromium, platinum, manganese and vanadium. In addition, there are large deposits of gold, diamonds and coal. It is therefore not surprising that mining is an important economic factor in this country. Electra Mining as an international trade fair offers the exhibiting companies an ideal platform for presenting their products and services. Since the opening of the Carl Stahl site in Port Elizabeth on January 1, 2017, the mining sector has been one of the company's most important target groups. For this reason, Carl Stahl South Africa Pty Ltd. was represented at this year's trade fair with its own stand. The company exhibited its core range of rope, lifting and safety technology products on around 25 square metres in Hall 5. The focus was on lifting clamps, waste water pumps and manual hoists. During the five days of the trade fair, the team led by General Manager Ramona Anlauf was able to attract a large number of potential interested parties and hold good discussions. For Carl Stahl, this was the first trade fair on the African continent and thus a potential gateway to the mining sector.
Read more 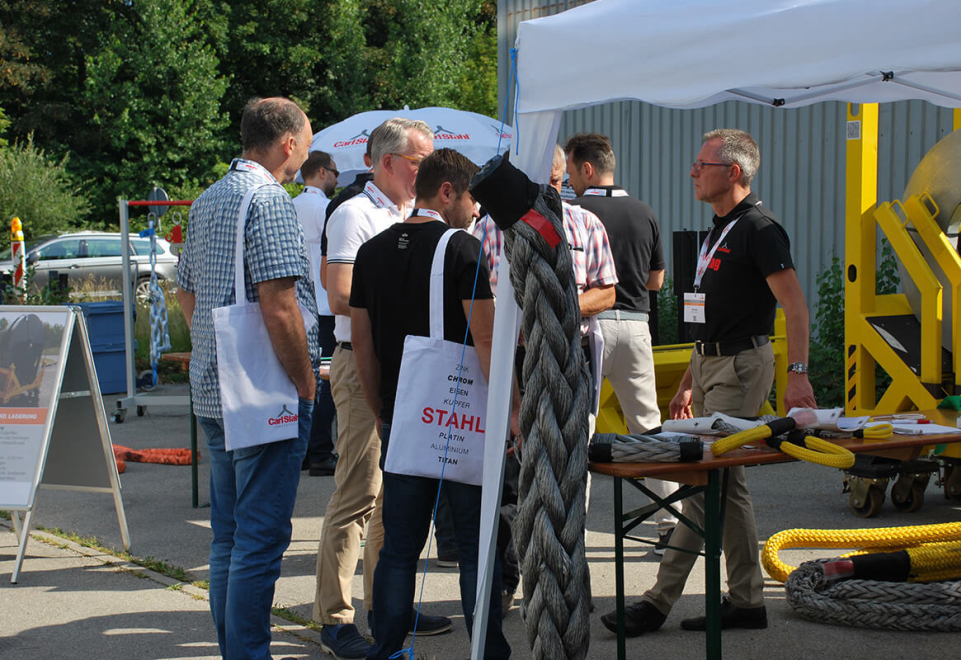 Review of Customer Active Day 2018 of Carl Stahl Süd GmbH
For years it has been the highlight of the event calendar: the Customer Activity Day of Carl Stahl Süd GmbH. On Wednesday, July 18, more than 350 guests accepted the invitation to the Carl Stahl location in Ottobrunn near Munich.
Read more
Get in contact with us
Thank you for your request. We will contact you shortly.
Carl Stahl Hebetechnik GmbH
Tobelstraße 2
73079 Süßen
www.carlstahl-hebetechnik.de
Tel.: +49 (0) 7162 40071000
Fax: +49 (0) 71 62 / 40 07-88 10